A screening of the classic Rocky Horror Picture Show will be presented at 9pm at the Galaxy Uptown Luxury+ IMAX Theatre in Gig Harbor.

Tickets are $10 at the door, Free for GHFF Members and anyone dressed in character!

For more information about this and other fun festival happenings throughout the year, visit www.gigharborfilm.org

If it’s your first time to a screening of the Rocky Horror Picture Show, you’re in for a wild ride.  One of the first things you’ll notice is that this film is interactive with numerous opportunities throughout for raunchy callbacks and participation.  However, since there are far too many callback cues in the script to list briefly, we suggest you simply sit back, relax, and join in the fun as best you can.  If you’re determined to immerse yourself fully in the experience, we applaud you and suggest a little internet research: there are a wealth of resources online where folks are quite happy to fill you in on all of the appropriate moments for public impropriety.
Another aspect of the Rocky Horror interactive experience is the use of props.  With the exception of a few items that don’t comply with theatre policy, the Galaxy is graciously permitting us to use many of the usual props for this screening. Here is the official list of approved props (N.B., if it’s not on the list, please don’t bring it.)  With this list, we invite you to prepare according to your deepest desires:

RHPS Approved Prop List
–Newspaper: When Brad and Janet are caught in the storm, Janet covers her head with a newspaper.  At this point, you should likewise cover your head.

–Flashlight: During the “There’s a light” verse of “Over at the Frankenstein Place,” you should light up the theatre with your flashlight.  Please DO NOT bring candles, lighters, or any other open flame sources for this purpose.

–Rubber Gloves: During and after the creation speech, Frank snaps his rubber gloves three times.  Later, Magenta pulls these gloves off his hands. You should snap your gloves in sync each time to create a fantastic sound effect.

–Noisemakers: At the end of the creation speech, the Transylvanians respond with applause and noisemakers.  You should do the same.

–Party Hat: At the dinner table, when Frank puts on a party hat, you should do the same.

–Bell: During the song “Planet Schmanet Janet,” ring the bell when Frank sings “Did you hear a bell ring?’

–Cards: During the song “I’m Going Home,” Frank sings “cards for sorrow, cards for pain.” At this point you should shower the theatre with cards.  Please do not throw cards or anything directly at the screen or at other patrons.

That’s about it.  We’re looking forward to a fun Halloween night together with this classic, and leave you with the following caveat from one online reviewer: “The Rocky Horror Picture Show is not recommended for the easily offended.  This show deals with mature subject matter in an immature way.  If sex, drugs, rock & roll, adultery, cannibalism, incest, cross-dressing, aliens, bisexual water sports, homosexual eye movements, and above all SHOW TUNES are not your cup of tea, this may not be the show for you.” 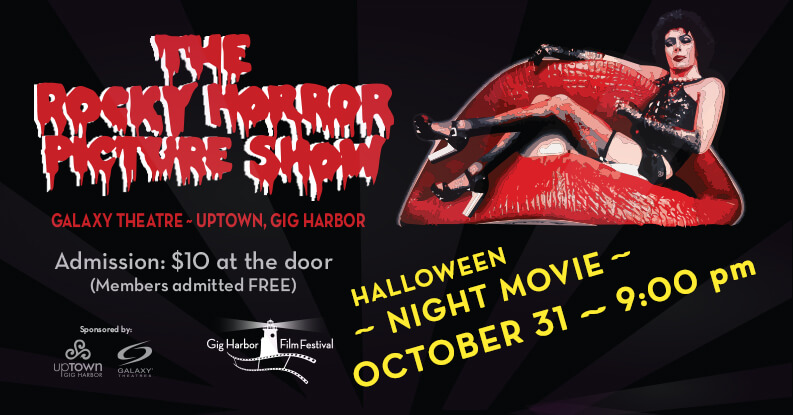